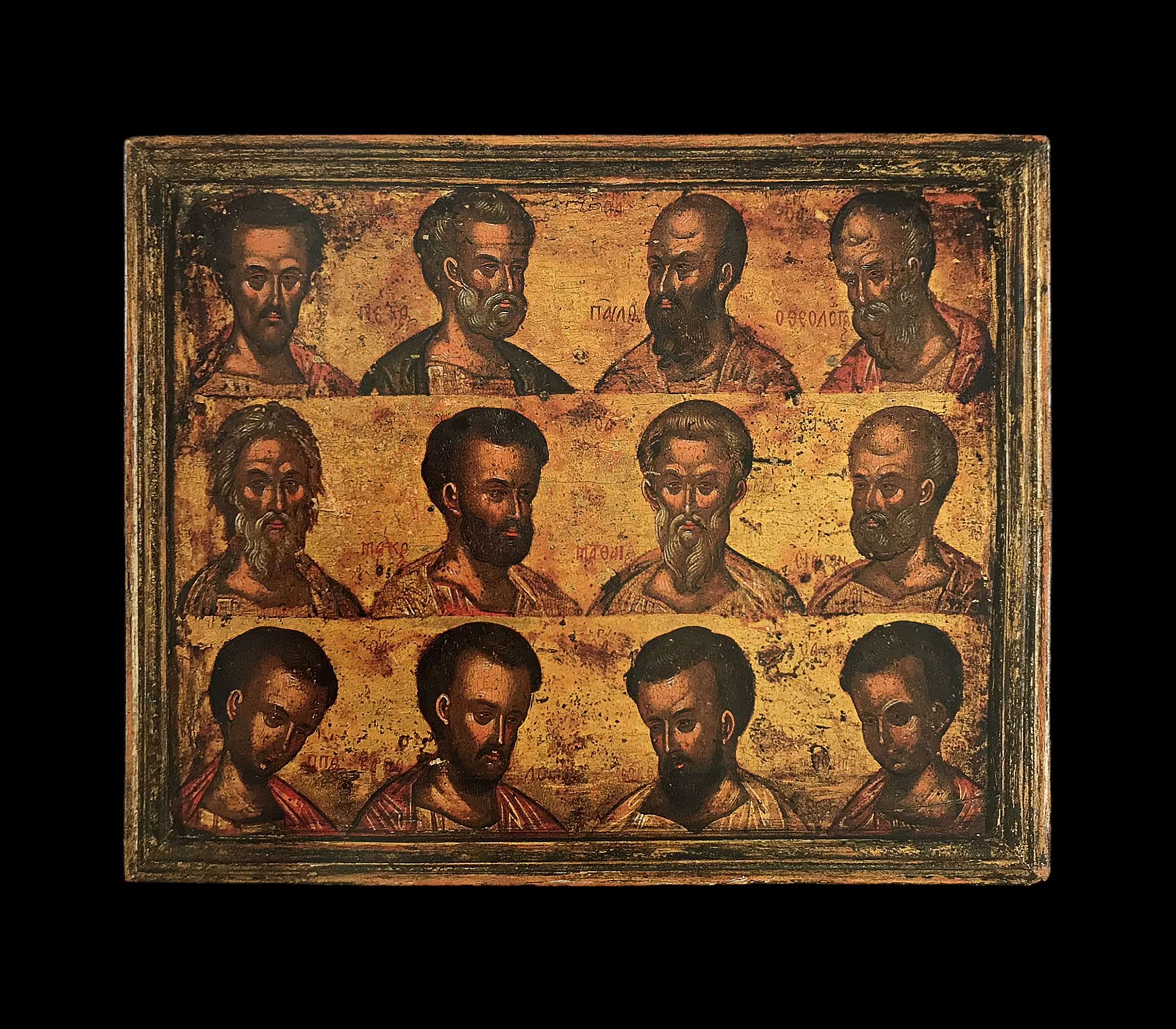 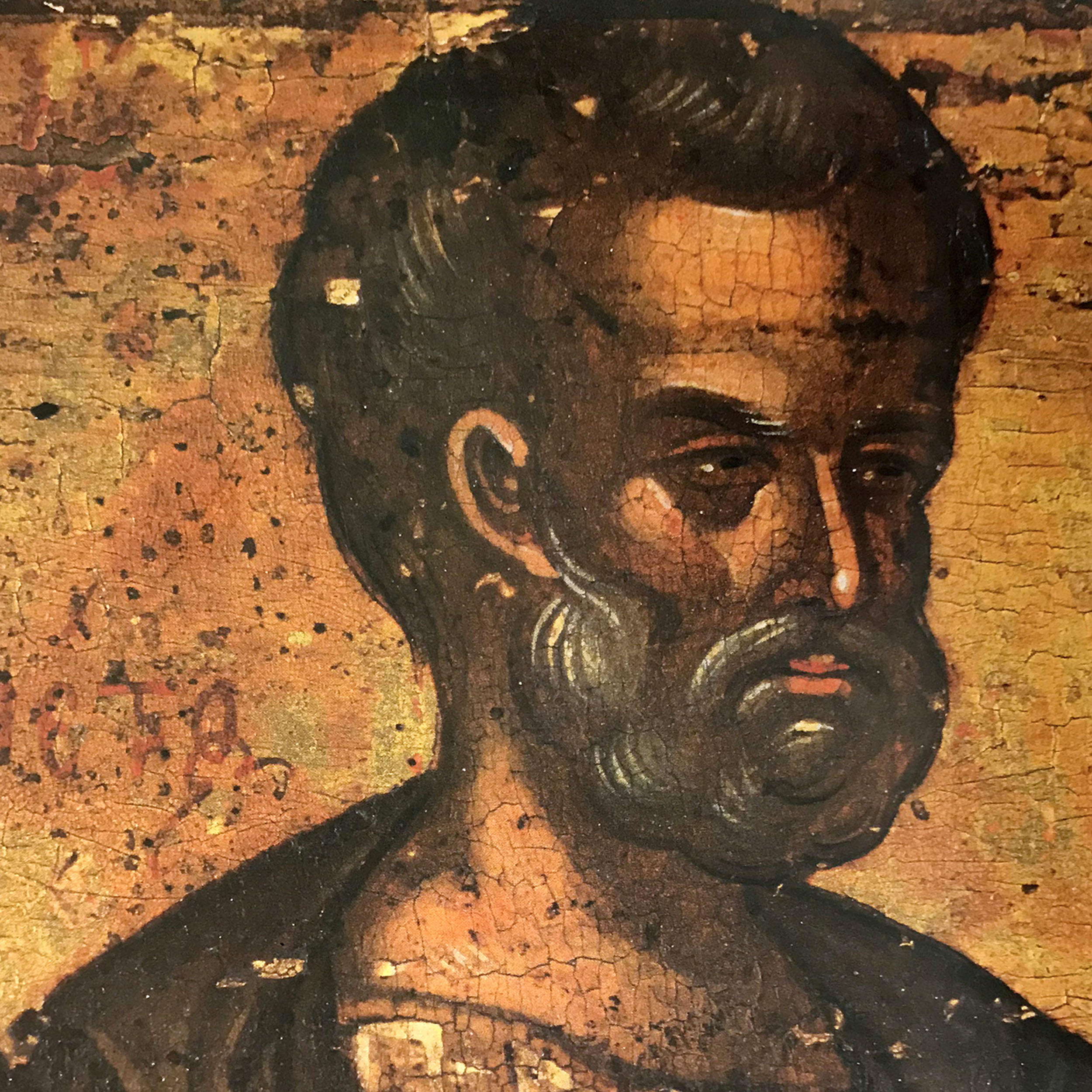 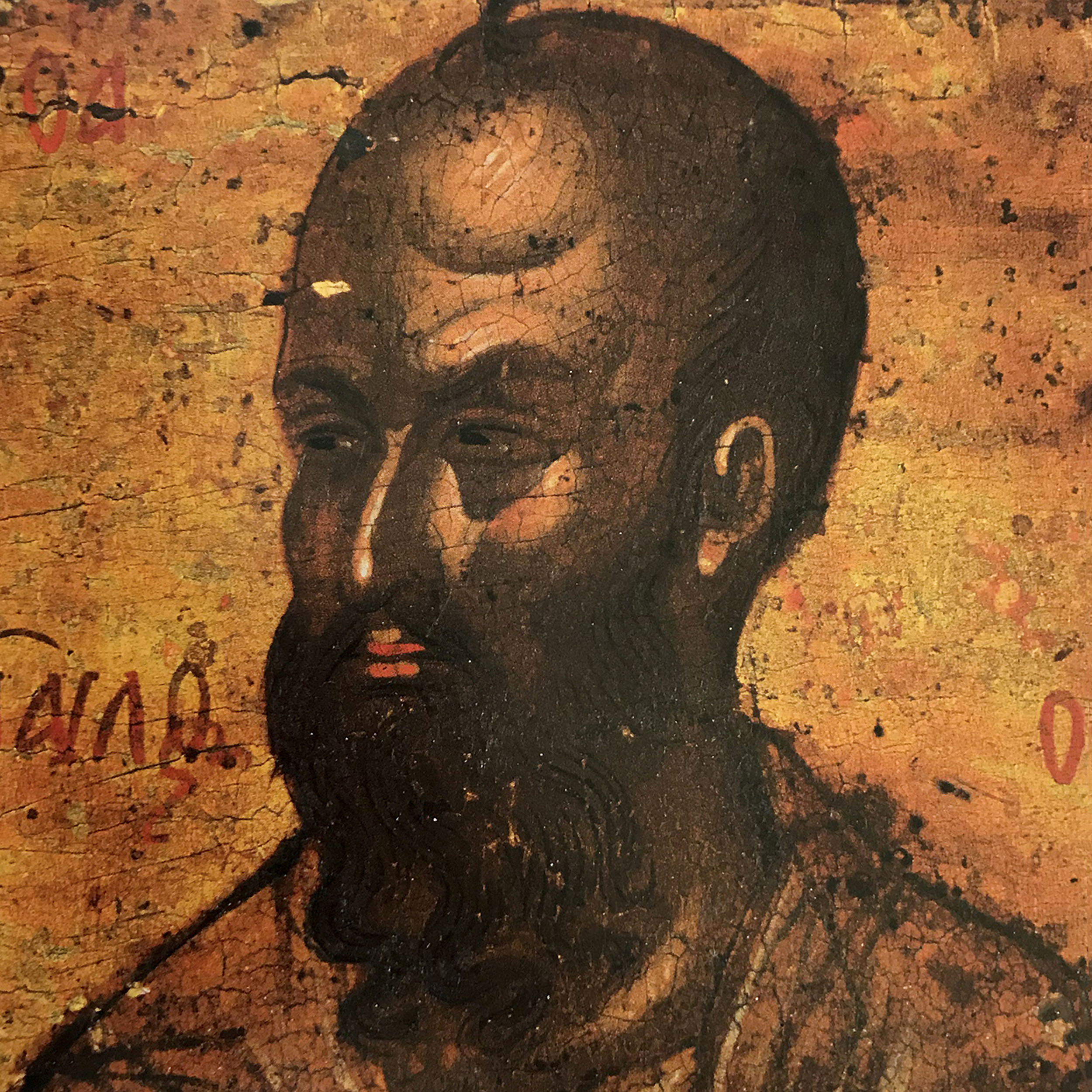 Busts of the Twelve Apostles

The busts of the Twelve Apostles are represented in three horizontal registers: above, Saints Luke, Peter, Paul and John the Evangelist; middle, Saints Andrew, Mark, Matthew and Simon; below, Saints Philip, Bartholomew, James (son of Zebedee) and Thomas. They are in different poses, displaying slight deviations from frontality, yet are symmetrical in the upper and lower rows. In the upper row, the first apostles Peter and Paul are placed converging at the centre, while in the lower the apostles Bartholomew and James are in a similar position and pose. In the middle register, Evangelist Matthew is in frontal pose, flanked by Mark and Simon, while Apostle Andrew on the left is depicted in a strictly frontal pose.

An analogous arrangement of busts of apostles is encountered on a folio of a twelfth-century Byzantine manuscript, also in the Canellopoulos Museum (Cat. no. 101), while their poses and arrangement are closer to depictions of them in the apostolic icons on iconostasis architraves known from the mid-sixteenth century, such as by Theophanes in the Great Lavra monastery, as well as by other painters, such as those attributed to the painter Antonios in the Xenophontos and Saint Paul monasteries (Monastery of Saint Paul 1998, 55-74, figs 18-27 – M. Vassilaki).

Additional stylistic similarities are ascertained in the apostolic icons by Michael Damaskenos in Corfu (Vocotopoulos 1990, 72-73, no. 49) as well as in other icons ascribed to the same painter, such as Apostle Andrew in the Velimezis Collection, in the Benaki Museum (N. Chatzidakis 1997, no. 18, 228-233, figs 139-140).

The figures are painted in a variety of poses, which diverge from the strictly frontal or three-quarter position, as also in the icons by Damaskenos. The noble ethos and the expressions imbued with a melancholic air are rendered as in the icons by Damaskenos with soft modelling of the facial features and smooth rounded planes with prominent illumined volumes on the cheekbones, while tiny light brushstrokes highlight the edges. For all the above reasons the Canellopoulos icon can be attributed to the circle of this great Cretan painter.