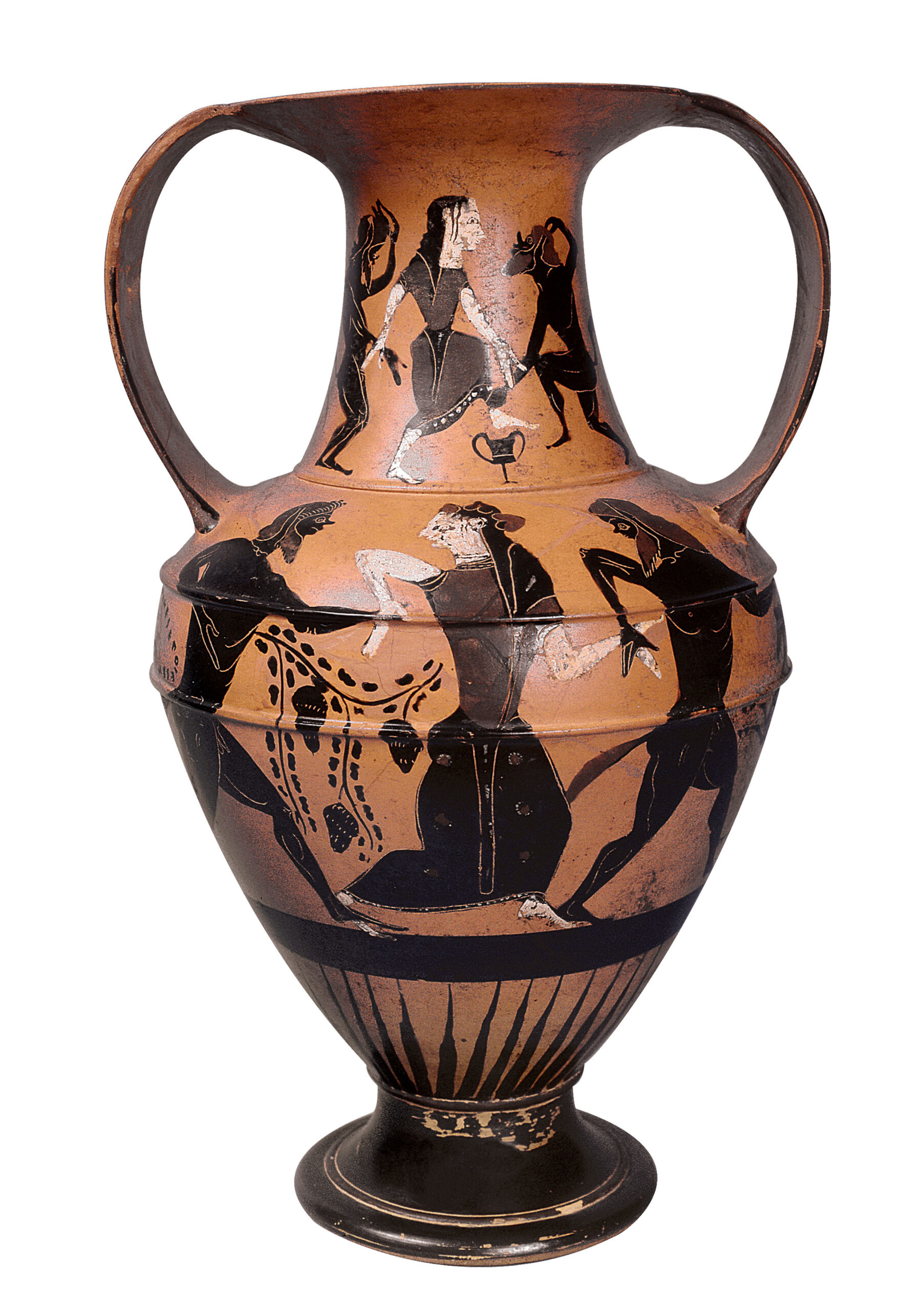 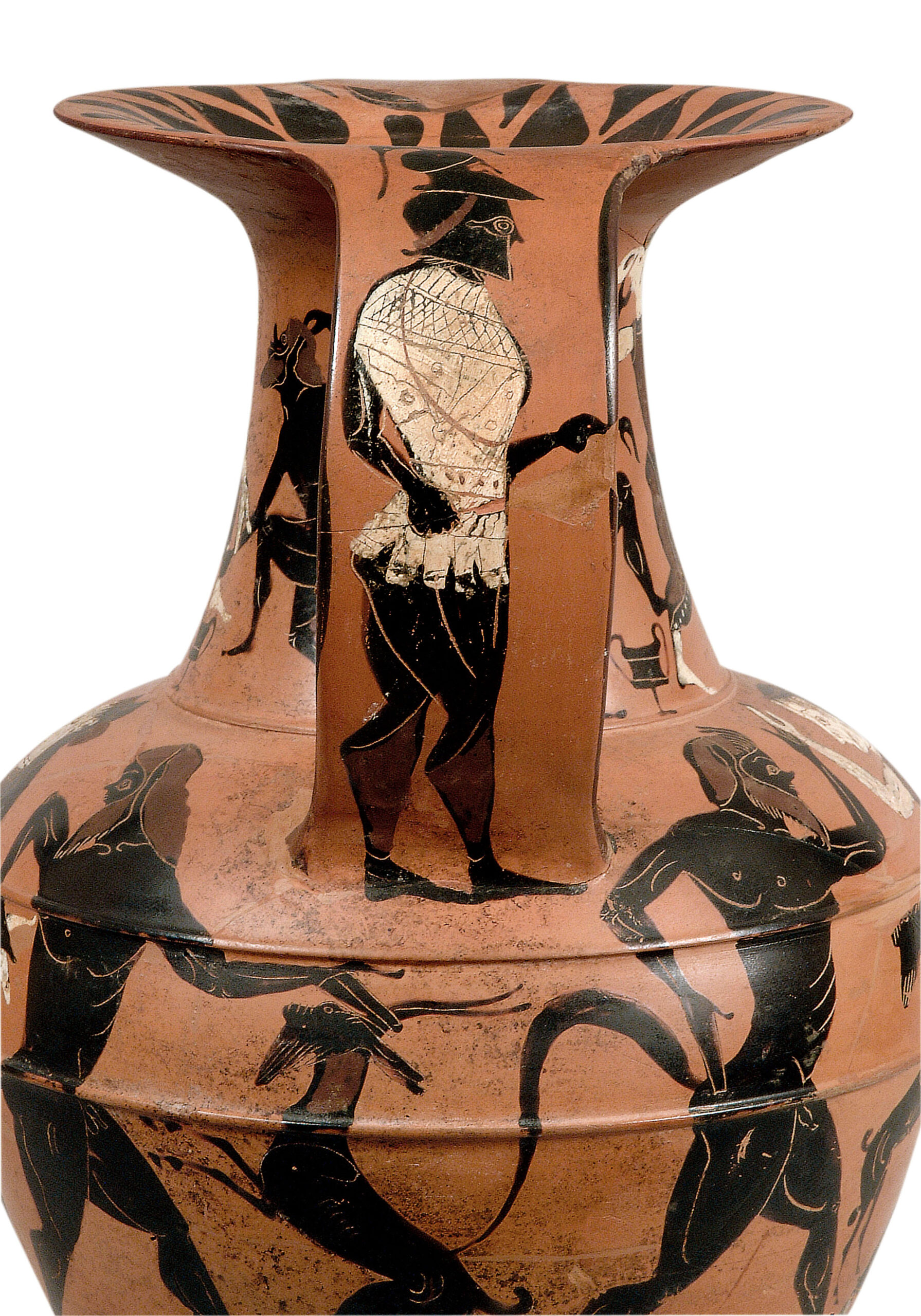 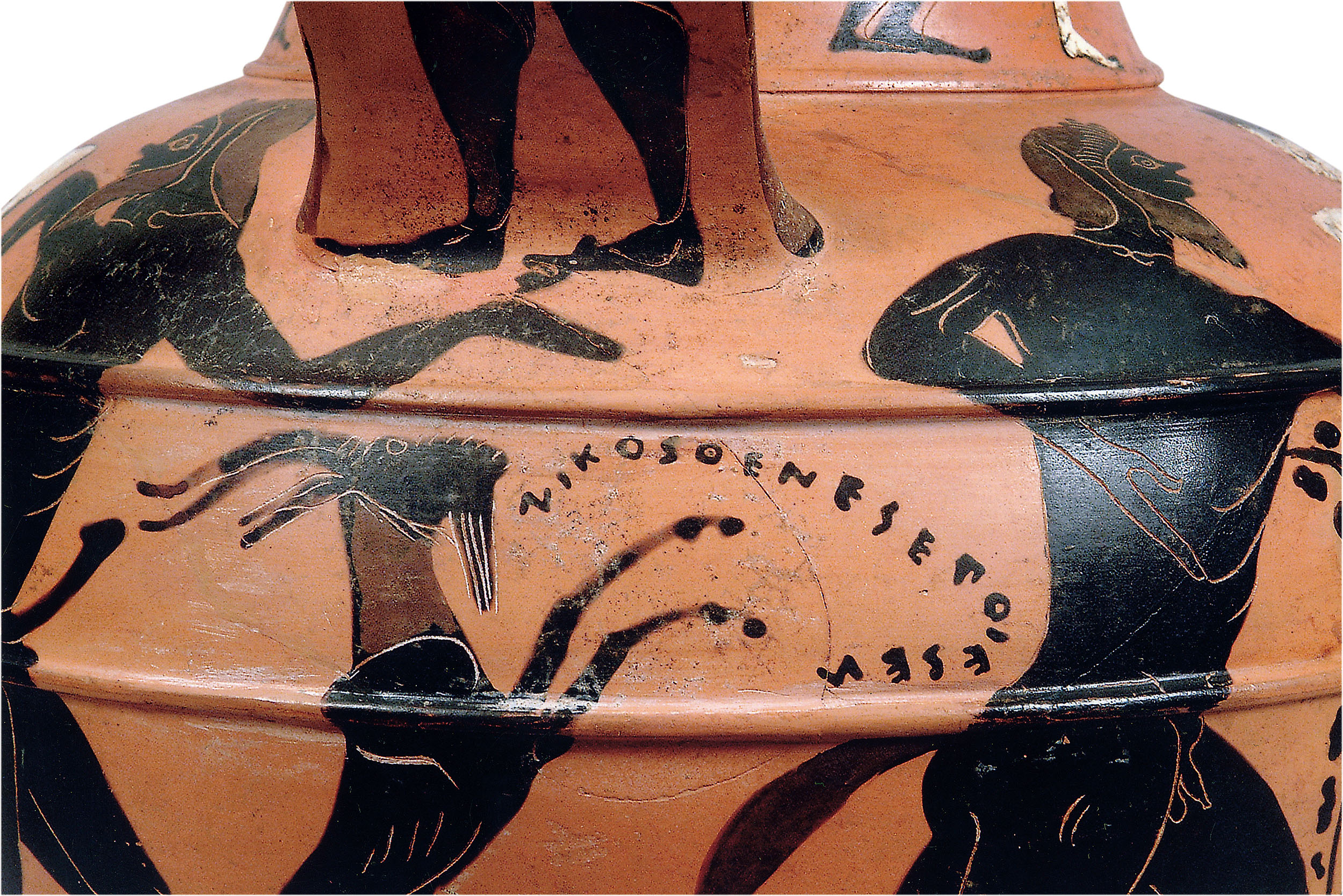 Black-Figured amphora by the potter Nikosthenes

The shape of the vase is characteristic of the amphorae from the workshop of the potter Nikosthenes. The zones of the vase are separated by rings in relief at the base of the neck, the base of the shoulder, the upper zone of the body and the beginning of the foot. Most of the body of the vase is taken up by a single Dionysiac scene. On each side two nude Satyrs and a Maenad are shown dancing. On one side grape vines with fruit fill the background, giving the scene a festival atmosphere. On the other, instead of vines there is a goat with his forefeet raised and head turned back. Beneath each handle there is also a goat. Beneath one of the handles is the inscription “NIKOZOENEE EHOIEEEN” (Nikosthenes made it). The figures dance on a continuous black band. A zone of rays decorates the lower part of the body.

On the neck is a corresponding scene of smaller Figures. On each side two dancing Satyrs frame a Maenad. A kantharos is shown at the feet of the Maenads.

The Maenads wear long, unpleated chitons belted at the waist. Purple colour has been used to emphasize the garments. The nude parts of the female body are shown with applied white. The hair and beards of the Satyrs are red. Anatomical details of the figures, their faces, the animals and details of the garments are deeply incised.

On each handle of the vase is shown a warrior. On one handle the warrior wears a short white chiton, cuirass with details incised, greaves and two helmets, one on top of the other to signify victory over his opponent whose helmet he has taken as booty. On the second handle the warrior is preserved from the waist down. A zone of painted antithetical tear-shaped leaves decorated the interior of the rim.

The type of scene, the build of the moving figures and their details show this to be a work by the “N Painter”, who decorated most of the amphorae made by Nikothenes. The sort of unified decoration taking up more than one of the zones of the vase is reminiscent of the Nikosthenic amphorae in the Louvre: an amphora showing a warrior fighting a horse-cock, an amphora with a scene of a Dionysiac thiasos and an amphora with a representation of a winged female figure, all attributed to this same painter.

Below the base of the vase is a painted monogram interpreted as a commercial sign. A similar sign, dipinto, is found on the Nikosthenic amphora in the Louvre with the Dionysiac thiasos scene. From the 7th century B.C. on, many vases have such signs, letters or numbers or some sort of symbol, incised or painted beneath the base of the vase. These signs are connected with the export trade of the pottery workshop.