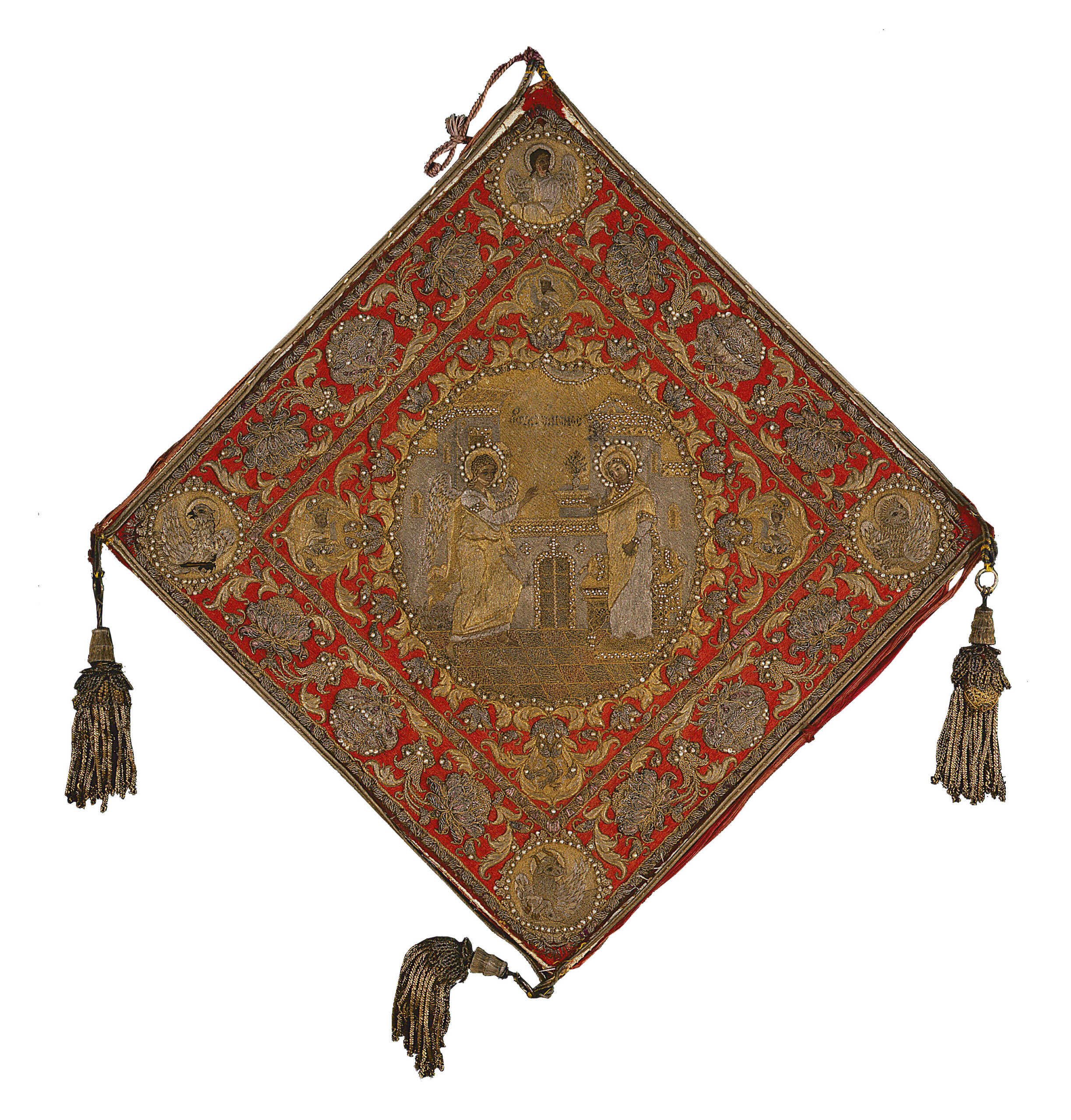 Epigonation with the Annunciation

The representation is framed by a wide band decorated with three large silver flowers on each side, which are supported and surrounded by gold leaf-bearing stems. In the four corners, within round medallions framed by tiny seed pearls, are the symbols of the Four Evangelists.

At the centre of the genual, within a circular medallion likewise framed by seed pearls, is the scene of the Annunciation, in the usual icono-graphic type that prevailed in the fifteenth century. Archangel Gabriel and the Virgin stand in front of high buildings, connected by a wall, in the middle of which is a closed gateway with a cross in its upper part, possibly a symbol of the eternal chastity of the Theotokos. The floor on which the figures step is of square tiles rendered in fairly correct perspective. The ground of the representation, the floor, Gabriel’s himation, the Virgin’s maphorion, the throne on which she had been sitting and its footstool are all embroidered in gold thread, while the wings of the archangel, the chitons of both figures and the architectural elements are in silver thread. The flesh of the figures is worked in coloured silks. The haloes, the outlines of the buildings and the gateway, as well as details of the throne and the footstool are picked out with seed pearls. Out-side the central medallion is a second floral ornament with silver flowers and gold leaves, while in the corners are gold calyx-shaped rosettes. Within the two lateral and the upper rosettes are the Prophets David, Solomon and Habbakuk, while in the fourth rosette, below, is a bird (dove?). From the edges of the epigonation hang gold tassels.

The naturalistic treatment of the lavish floral decoration and the obvious Western influences in the perspective (e.g. the paved floor), as well as the facial features, point to late Baroque of the eighteenth century. The epigonation is similar in many ways to a somewhat more austere one and a pair of maniples kept in the monastery of Saint John the Theologian on Patmos. These are works of the embroideress Eusebia from Constantinople and are dated 1734. Even more similarities, particularly in the decorative disposition, are encountered in a pair of maniples with representations of the Nativity and the Baptism, which are kept in the Simonopetra monastery on Mount Athos and have been attributed to a Constantinopolitan workshop of the second half of the eighteenth century (Simonopetra 1991, 217-218, figs 140, 142).